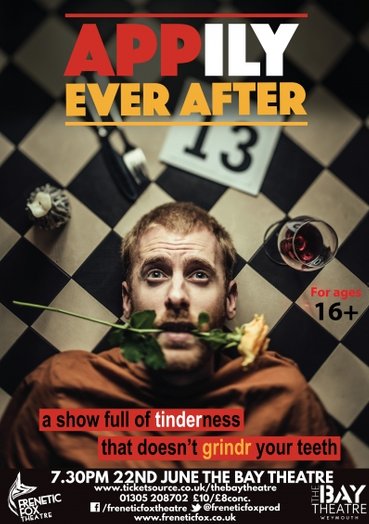 Appily Ever After is the debut show by Frenetic Fox Theatre.

In September 2016, Paul committed to a year-long, part-time residency as theatre-maker for the LEAP Project (Local Emerging Artists Platform) at Weymouth College in Dorset. The scheme began in 2009 - offering select alumni of the performing arts department an opportunity to develop new work on the premises as practitioner/company in residence. Within this time-frame Paul developed ‘Appily Ever After’ a solo performance piece, and the debut show by Frenetic Fox Theatre, featuring original song, projection and spoken word.

Paul's thumb has found the one.

Drawn together by a multitude of dating apps and his owner's unrealistic yearning to be united with his soul mate.

But where does this leave Paul? Can he gauge the intellectual capacity of a potential suitor by the extent of their typos? And is he capable of answering the key existential question of our generation: Does one gym selfie truly capture the inner workings of your soul?

Serenading you with original song, spoken word and just the right amount of desperation, join Paul as he questions your relationship with dating apps - exploring tech-addiction, disillusionment and how far are we prepared to go to be fulfilled.